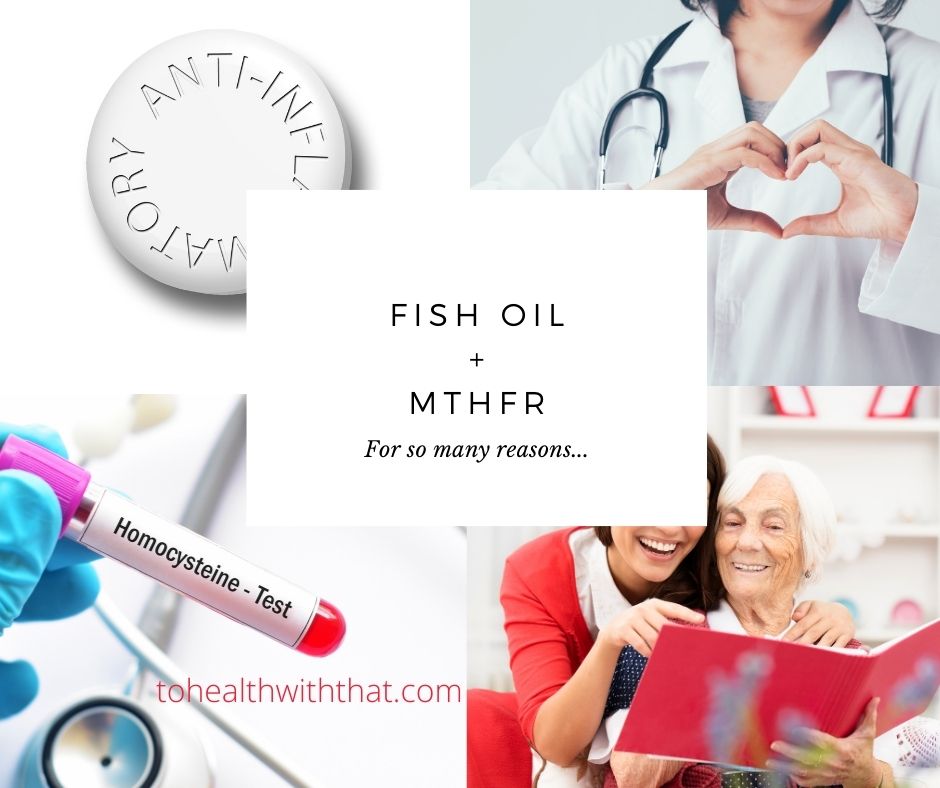 Fish Oil and MTHFR, What Is The Link?

We’ve all heard about fish oils and omega3 fatty acids for so many incredible reasons. They are strongly anti-inflammatory and perform almost as well as non-steroidal anti-inflammatory tests for pain relief, without side effects.

They have been most strongly studied for heart disease and show an almost unbelievable array of benefits. Fish oils reduce the risk of sudden death from cardiac arrhythmias, reduce all-cause mortality in patients with known cardiac disease, and help to treat high cholesterol (hyperlipidemia) and high blood pressure (hypertension.) All of this, without significant side effects or drug interactions.

Studies have also shown that countries with higher intake of omega-3 fatty acids have lower rates of depression. Fish oils have also shown beneficial effects in both research and clinical practice for diabetes, Alzheimer’s disease, stroke, and autoimmune disease.

What about Fish Oil and MTHFR?

Most studies aren’t MTHFR-specific.  But, fish oil has benefits for so many of the long-term consequences of unbalanced methylation in MTHFR, that it makes sense that there would be some link.  What reserach has found is some kind of synnergy between fish oil and B vitamins, in which the combination works better than either therapy alone.

Omega-three fatty acids and B vitamins for cognitive decline

A randomized placebo-controlled  trial of people with mild cognitive impairment found that treatment with B vitamins lowered homocysteine and slowed the rate of cognitive decline. Researchers went back and re-analyzed the data from this study to see if baseline levels of omega-three fatty acids interacted wtih the results in any way. The study involved mental testing over the course of two years.They found that for all outcome measures, higher concentrations of DHA significantly enhanced the effects of B vitamins, while the levels of EPA had less of an impact.

Not only that, when omega-3 fatty acid levels are low, B vitamin treatment has no effect on cognitive decline, but when omega threes are in the high-normal range, B vitamin treatment becomes effective. There is some synnergy happening here that needs further investigation to fully understand, but since omega-three fatty acids are good for so many things and truly haven’t shown negative consequences it makes sense to add them in as a no-risk measure for seniors with cognitive decline.

The methylation process itself seems to be involved in the metabolism and distribution of these polyunsaturated fats through your body, which means that MTHFR and omega-3s are intimately linked. Also, it has been theorized that omega-three fatty acids actually have expression control on enzymes within the methylation cycle, so effectively MTHFR controls omega-threes, which control MTHFR. There is not a big enough body of research yet to draw firm conclutions, but the evidence is pointing in this direction.  For MTHFR folks, the most important thing to understand is that using fish oils and B vitamins together produces a great reduction in homocysteine levels than using either one alone.

Inflammation, heart disease, cognitive decline, and high homocysteine are all problems that happen more frequently in folks who have MTHFR with unbalanced methylation, and since fish oils effectively address these problems, it almost seems like a gimme.

Next week, we’ll talk about a few bits of research being done regarding fish oil and gene expression for MTHFR folks. The research is new, but it’s starting to get good.