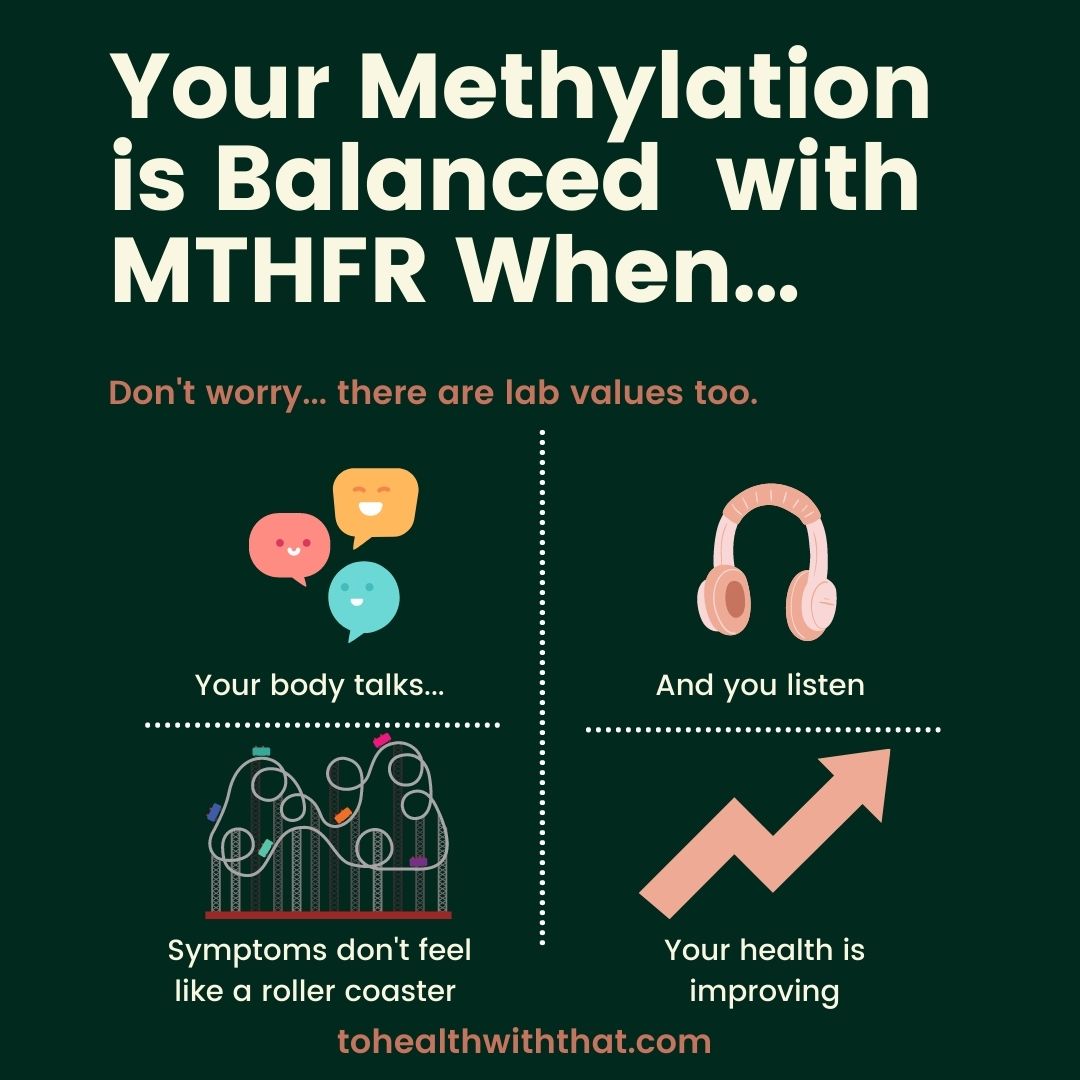 How Do You Know When Your Methylation is Balanced With MTHFR?

It’s great to talk about “balancing your methylation” and finding your right folate dose, but how do you know when you’re actually there? This question matters a lot because I’ve seen so many clients who are on a constant upward trend with their methylfolate dose – always pushing to take more simply because they can tolerate it.

The point is, do you need it? Is it helping you? This isn’t a contest in which the person who takes the most methylfolate wins a prize, this is about listening to your body and finding balance – balance meaning not too much and not too little. This goes for MTHFR folks, but also people without an MTHFR polymorphism, because you don’t have to have MTHFR to have imbalanced methylation.

So where is this elusive magical place in which balance is reached? It may not be nearly as elusive, nor as magical as you’re thinking.

Does Balanced Methylation Mean All My Symptoms Are Gone?

Goodness, I wish it did. It usually means most symptoms are better, and some of them are gone, but all of your symptoms being gone is not actually realistic. We’re all human and human bodies are built differently for lots of reasons. One of those is MTHFR, but each human has hundreds of polymorphisms along with a whole life history of pathogens, traumas, nutritional factors, lifestyles, and varying degrees of self-care. Balancing methylation can’t compensate for all of that, it just takes a big chunk out of the bottom.

Having said that, the process of balancing your methylation usually helps people tremendously – decreasing anxiety, softening depression, improving sleep, reducing inflammation, normalizing hormones and generally getting things closer to where they should be.

What Is The Easiest Way To Tell If My Methylation Is Balanced?

Caring For Your Methylation

You know you’re at a place where your methylation is balanced when these things are happening:

I see the same panic-stricken look on many faces when I say this, especially from folks at the beginning of their journey. Don’t worry – this all becomes clear over time and this is a journey that takes time. In good news, the best way for it to all unfold, is softly. This is a lot like pregnancy in that you can’t really rush it – it’s best to just support the process. For everyone who has just muttered something grumpy under their breath, the next section is more concrete. I promise.

Ok – So What About Lab Work?

Basic bloodwork can tell you a lot about what your body is doing at that moment. Values that are most specific to methylation are:

There are also some tests that are suggested on various MTHFR forums that I am less inclined to use including:

We’ll go through the tests I use one by one. The tests I am less inclined to use we’ll cover in a different post.

This test measures levels of B12 in the serum and is reasonably accurate, but has a broad reference range. The reference value is typically 180 – 914 ng/L and anything in there is considered normal. Anything below 180 ng/L is considered to be deficient. Because it is such a broad range, I tend to look at anything even close to 180 ng/L with suspicion. Remember reference ranges give us the average numbers where people begin to experience symptoms, but that doesn’t mean it’s the ideal number for you, so aim for the middle of the range (somewhere between 450 – 650 ng/L). Also, if you test normal but still have symptoms of B12 deficiency, then extra supplementation could be warranted.

We’ve talked a lot about serum homocysteine and there is a normal range and also an optimal range. If you’re outside of normal, then obviously there’s a problem, and for MTHFR folks it’s a good idea to aim for optimal. The normal range is 5 – 15 umol/L with optimal being 6 – 9 umol/L (in my opinion. Follow the link to see my reasoning.) Homocysteine, remember is an inflammatory marker in the blood that is a direct measure of how well you’re methylating methionine and so is the clearest measure of MTHFR function.

Are There Other Tests?

There are other tests, namely serum MMA, urine MMA and urine FIGLU. These tests are less commonly used and deserve a post of their own when we have more time. I find the serum folate, serum B12 and homocysteine to be the most useful of the bunch.