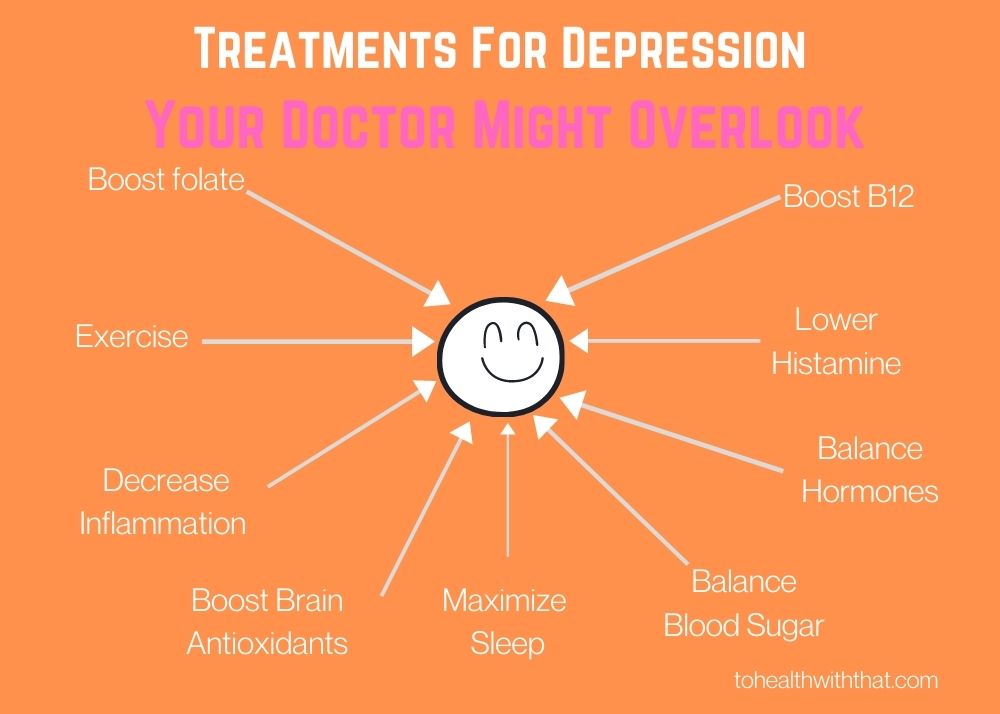 Depression is a common thread among all humans – this isn’t limited to MTHFR folks in any way, but as folks with an MTHFR variant, balancing methylation can be an effective way of tackling depression that is often overlooked by doctors and practitioners.

The problem is, this theory doesn’t actually pan out for a lot of people – especially MTHFR people. A drug that boosts the activity of serotonin in the brain should work, but often doesn’t. It has a lot of merit to explore other cuases of depression as well – especially when so many of them are fixable.

Many factors play into depression and some of these are related to MTHFR, and some aren’t.

Each of the factors above is measurable and trackable and highly treatable, with or without an MTHFR mutation. Each of those factors can be worked on independently, but also any step toward a healthier lifestyle is going to help in many of those areas.

For example, balancing your methylation (which for us MTHFR folks usually means either taking a good form of folate or if we don’t tolerate folate, then finding a good work-around) will help to raise folate levels, lower homocysteine, and reduce both inflammation and oxidative stress. So one change is influencing four big contributing factors to depression. Does that mean balancing your methylation is going to fix your depression completely? Not necessarily, but it does get us closer to the goal and also improve your chances of responding better to other therapeutic interventions as well.

So from this list, we have a number of natural treatments for depression:

Every one of those is a book in and of itself, but seriously that is a lot of options to try, and all of them will lead to greater health regardless.

There are also two special factors that we haven’t talked about yet. One pertains more strongly to MTHFR folks, and the other is just a human-nature problem.

I feel like all of this could appear daunting, but if you look at it another way, it also opens up so many opportunities for healing that are often overlooked. It can be incredibly discouraging when your doctor runs out of options for depression, but chances are they haven’t even scratched the surface of this list. Typically doctors look at sleep, blood sugar, and neurotransmitters in terms of depression. You now have the opportunity to dive deeper.