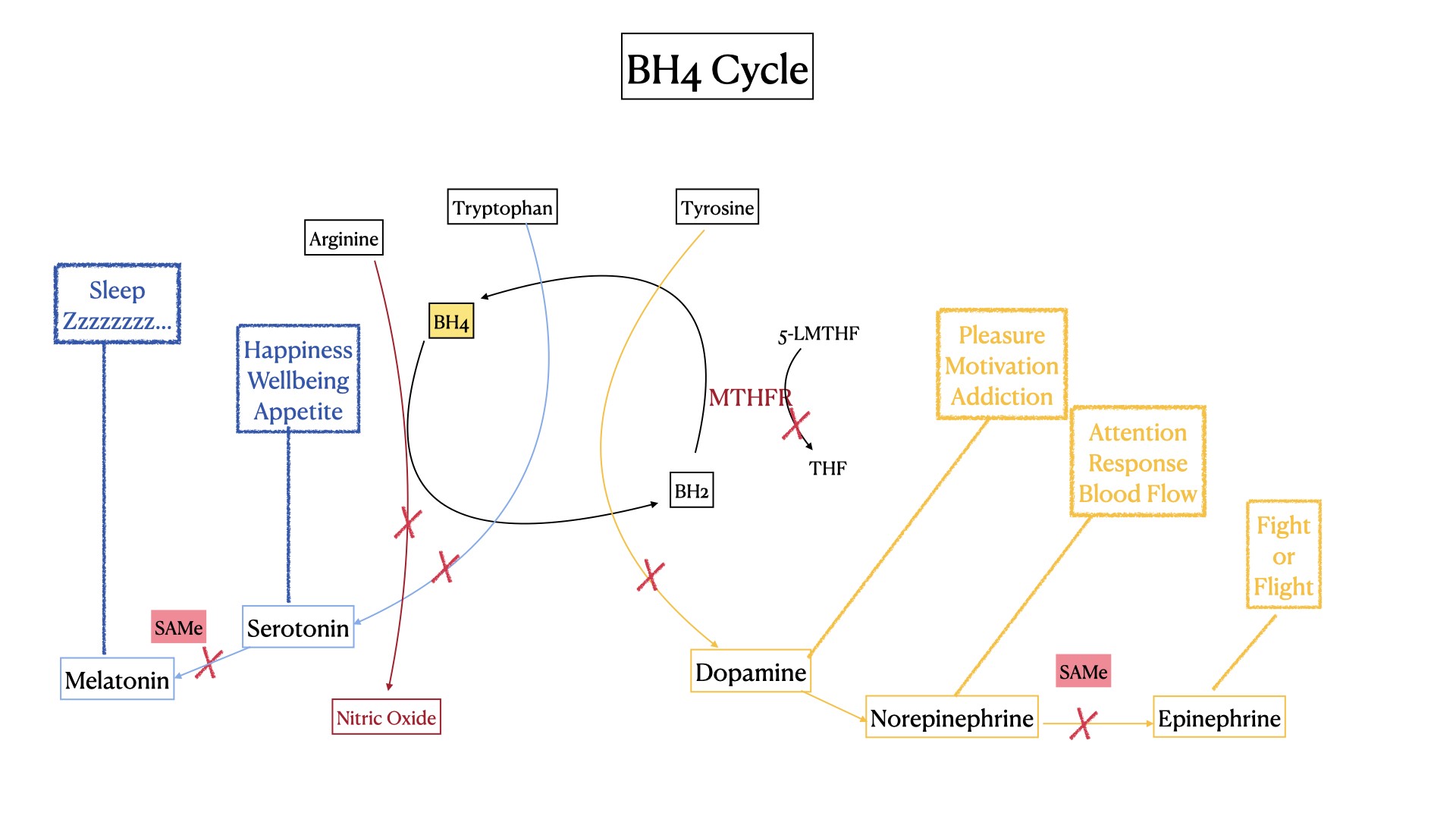 MTHFR and Serotonin – an Unhappy Marriage.

Let’s talk BH4, biopterin, and the whole sh*t show. Remember the interlocking metabolic loops in which the methylation pathway intersects and cogs into other pathways, essentially so that it affects everything your body does? Yeah. We’re getting back into that mess.

You’ll notice that the green MTHFR process sits smack between the folate cycle and the BH4 cycle. The other inconvenient thing you might notice is that the products of the BH4 cycle are, inconveniently, serotonin, and dopamine. These are your internal happy pills – when your body takes you to a happy place it is because of these molecules. Neurotransmitters = happy pills. MTHFR and neurotransmitters = problem. Also, serotonin and melatonin (your sleep hormone) are linked, so there are other consequences to this whole thing being out of whack.

I’ve Never Even Heard of BH4!

Right? BH4, also called tetrahydrobiopterin, isn’t something that people talk about because normally it happens in the background. BH4 doesn’t do too much that is exciting other than contributing to other reactions, so nobody talks about it. The problem is, the other reactions it contributes to just happen to be the ones that make your neurotransmitters (also, our nitric oxide, which will be important when we’re talking about blood flow and heart disease).

Without MTHFR You Can’t Make Your Internal Happy Pills

Without a fully functioning methylation pathway (and it’s end-products like 5-LMTHF and SAMe) your body has a decreased ability to make Serotonin, Melatonin, Dopamine, Norepinephrine, and Epinephrine. In short, with an MTHFR issue, your body struggles to make enough neurotransmitters. Also, via this same BH4 nonsense, Nitric Oxide but we’ll have to cover that in a separate post.

Low serotonin feels not so good. Sad, low mood, low enjoyment, hungry – probably craving carbs. Just not feeling the zing in life, even if your life is full of zing. You might be feeling irritable for no reason, you might be feeling tired -even tired to the point of chronic fatigue syndrome. It could feel like hopelessness, and at the extreme end, you see thoughts of suicide. Depending on how low your serotonin is you could have mild symptoms or you could be clinically depressed. Serotonin also has a number of functions outside of mood including regulation of digestion. If your serotonin is really low, you might want to read this.

Low Melatonin feels pretty bad too. This is the can’t-fall-asleep, gaining weight for no reason, brain fog and dog-tired problem.

Low dopamine feels like being bored. Bored, bored, bored. Loss of satisfaction, joylessness, apathy, and low energy. Also low drive, low attention, lack of motivation, and enthusiasm. Extremely low dopamine can lead to something called anhedonia (the opposite of hedonism) which is absolute lack of pleasure in anything. Also, low dopamine levels are highly associated with addictions, because if you can’t get joy anywhere else, you might get a high from a drug.

Low Dopamine Can Lead to Low Norepinephrine and Epinephrine

These can lead to low energy, lack of concentration, attention deficit and also anxiety or altered fight-or-flight response.

This is Miserable. How Do I Fix It?

Your doctor will probably suggest antidepressants, which work miracles for some people, but tend not to work as well in those of us with MTHFR mutations. So there is that. For MTHFR mutants, it all comes down to balancing out the methylation cycle so that there is enough 5-LMTHF, SAMe, BH4 (or tetrahydrobiopterin), and generally enough methyl-groups to go around. If you’re ready to get started doing that, check out our Start Here for MTHFR document!

There are a few BH4 supplements available, but they haven’t gained a lot of traction for neurotransmitters and are used mostly for cardiovascular disease (to boost nitric oxide, which is a big deal) and also for a condition called phenylketonuria, which is unrelated to this discussion.

There Is Good News!

SAMe supplements can be extremely helpful to begin to enhance neurotransmitter formation without actually fixing methylation directly, and can be a great stop-gap while you’re working to get your methylation sorted out, because that can take some time and patience.

A Note About Melatonin

Melatonin is your body’s sleep hormone, but it also crosses the blood-brain barrier to act as an irreversible antioxidant in the brain and helps to regulate your weight. For many years there has been a myth that taking melatonin as a supplement will decrease your body’s own production, as is the case for many hormones. In good news, there is zero researched evidence that this is true – there is no evidence that taking melatonin decreases your body’s own production. Also, if you’re not sleeping well and haven’t been for some time, then chances are your natural melatonin is all being used to protect your brain and none is left over for sleep. Supplemental melatonin can help you get to sleep and increase your sleep quality. Usually, a low dose is enough, but if you’ve been sleep deprived for years you might need to up things a little. A typical starting dose is 3 mg. Doses of 20 mg and greater have been used with some success for many solid-tumor cancers, and some people are sensitive enough to it to need only 1 mg or less.

When you take melatonin, if you fall asleep well but wake in the night feeling wide awake, then the dose might be too high for you. If you don’t fall asleep easily, then the dose is probably too low. So at least this is one BH4 problem that we can solve.

Next week we’re starting the dive into fixing your methylation because it seems like you should be able to just take some folic acid and be sorted, right? Yeah. except that for MTHFR folks, there is some pretty compelling research showing that folic acid is actually the next best thing to toxic.