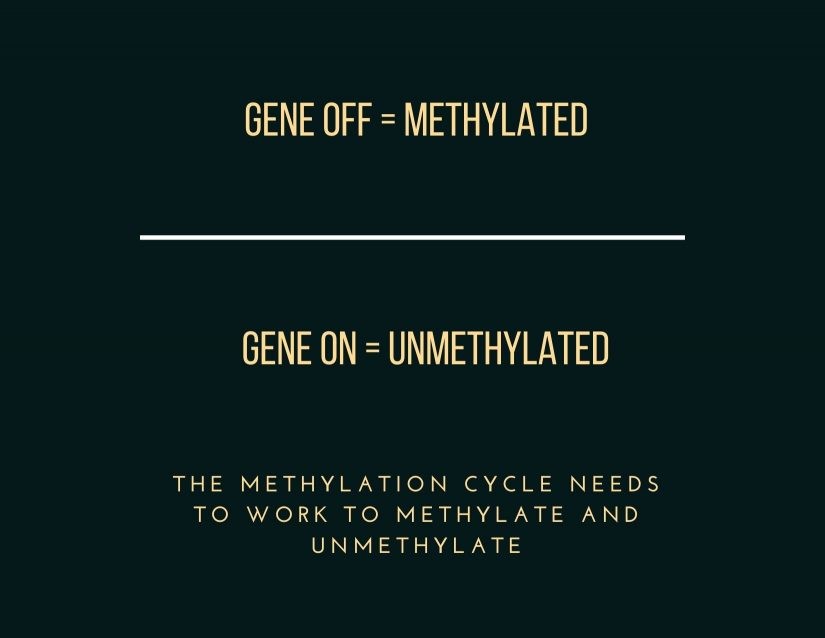 MTHFR is the rate-limiting enzyme in the methylation cycle, so the whole cycle turns into a bottle-neck at this point very easily. The methylation cycle is something we’ll talk about in greater detail later on because methylation matters. At its most basic it converts homocysteine, which is inflammatory, into methionine and ultimately SAMe. SAMe is the universal methyl donor and is necessary for almost all methylation reactions.

One simple way to illustrate the importance of methylation is to talk about gene expression. The processes in your body are essentially run by your genes. In order to turn on or off certain genes, they must be methylated. If we’re talking about the gene function of apoptosis or programmed cell death, then you really want it to be working when it should be.

Apoptosis is one of the ways your body protects itself from damage. When the gene is on (or unmethylated), the cell will self-destruct if it gets damaged. That is a good thing. If it is off (or methylated), then the cell will continue to replicate out of control even when it’s damaged. We have a word for that – it’s cancer. This could be one reason why MTHFR polymorphisms have been linked to so many different types of cancer – because your body just can’t methylate or unmethylate properly.

Outside of the methylation of genes, you also have to methylate some toxins in order to eliminate them, which means people with MTHFR mutations have differences in the way they process things like alcohol, formaldehyde, certain pharmaceutical drugs, hormones, and many other things. Methylation is also crucial when you’re building neurotransmitters like serotonin, dopamine, epinephrine, and norepinephrine.

Perhaps now it is easier to see why the internet is abuzz with news of MTHFR. A lot of this information is incredibly beneficial and helpful and accurate and some of it is a little bit crazy-making. The echo chamber of the internet does tend to amplify noise.

That pretty much sums up why MTHFR matters so much and why methylation is important – because those four things, combined with nutrition, are literally the foundations of a healthy human. We’ll talk about the last three in seperate topics, but today I want to focus on gene expression.

What IS Methylation? Really?

Methylation is so anti-climactic when you really get down to the nitty-gritty. It’s the addition of a methyl group to whatever you’re methylating. That begs the question what is a methyl group?

Um… What Am I Looking AT?

Outside of a mutant mouse head, it’s actually the chemical structure of a methyl group. One big carbon and three hydrogens bonded to it. This methyl group is the functional part of 5, L-methyltetrahydrofolate, or 5, L-MTHF, which is the valuable thing that you get out of the magic chair after the less valuable thing (folic acid) sits down. If this is all gibberish right now, read this post here or listen to the podcast from the beginning.

If you’d like a fancier, more chemistry-looking version, it’s here. This is the entire molecule of 5, L-methyltetrahydrofolate, courtesy of PubChem, with the methyl group circled.

The Mutant Mouse Head is Causing All This Fuss?

If you picture your body like a vast, complex lego structure that moves little lego pieces around to get things done, then the mutant mouse head methyl group is one of the foundational pieces that moves around all over the place. It’s a simple on/off switch for genes, but as it happens, being able to turn genes on and off is crucial.

Why Do We Need To Turn Genes On And Off?

We have the tendency to think of our genes like a recipe out of a recipe book. The directions to follow to build (or maybe to bake) a human. This is both accurate and not complete. Your genes are the recipe to build you, but they’re filled with stretches of information that has come from outside of you, like from viruses, or information that isn’t directly used to build anything. There are also lots of bits that we don’t fully understand.

45% of your genome is composed of transposable or viral DNA. Transposable elements are called “jumping genes” and are not fully understood. They do contribute to mutations as well as a number of diseases including hemophilia, severe combined immunodeficiency, porphyria, muscular dystrophy, and Alzheimer’s disease. Viral DNA is literally leftover from viruses, and so methylating these elements well allows your body to silence them. If you aren’t methylating properly, then these genes can start to express, causing genetic errors, and potentially disease.

Some of the most critical DNA methylation happened during embryonic development, well before you were born. There is also ongoing methylation that happens as cells divide and it is especially relevant within brain cells. We don’t know a lot about it, but we do know this:

Can We Actually Impact This By Optimizing Methylation?

According to sperm studies, we can. Sperm seems like a bit of a random thing to analyze, but the fact is; men make sperm fresh daily. It’s a great way to measure current activity vs. what happened during growth and development.

While I’d love to see the same study repeated with a more bioavailable form of folate than folic acid, this is still great data. I take it to mean that we can influence the methylation of our DNA by optimizing our methylation cycles. That is a really big deal.

Next week we’ll talk about methylation and detoxification because when we’re talking about optimizing methylation, you have to understand why “detoxing” and also toxin avoidance are so important for MTHFR mutants.