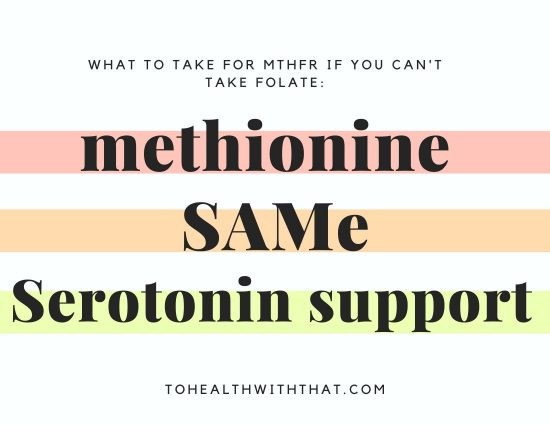 I Can’t Take Folate – Now What?

We all know that MTHFR mutations are differences in the way your body processes folate, so obviously the answer is to take more or better folate supplements like 5-LMTHF or folinic acid just like every doctor out there talks about. It’s so exciting to have a solution to the health issues that you’ve been struggling with! The problem is, there is a significant chunk of MTHFR folks out there who just don’t tolerate folate and never will. Truly, never. If you’re not sure why not being able to tolerate folate would matter in MTHFR, then read the Start Here Guide to MTHFR.

Typically these people are in the group of MTHFR folks who tend toward undermethylation. Undermethylators make up about 45% of the population and while some of them do tolerate folate in low doses in foods or even a very tiny dose in a supplement, many of them don’t tolerate any folate at all, not even in food. There are exceptions, of course including low-serotonin overmethylators.

Now How Do I Deal With MTHFR Issues?

You’ll recall that the whole methylation cycle is mostly accomplishing two goals. One is converting homocysteine to methionine (to avoid homocysteine buildup), and the other is making SAMe (a methyl-donor).

So, if you can’t convert homocysteine to methionine, and you can’t make SAMe, you can still get the cycle and all related processes going by taking methionine and SAMe. It’s a bit of a cheat, but it helps to solve that one very basic problem and for most people, boosts their mood tremendously.

But Why Is This Happening In The First Place?

For most undermethylators who don’t tolerate folate, it’s happening because their serotonin is just so low. This can happen to overmethylators too, but it’s far less common. The key issue is typically LOW SEROTONIN and folate of any kind makes the depressive symptoms of low serotonin worse.

The basic trouble is that folate, 5-LMTHF, and folinic acid (also folic acid, but I know you don’t allow any of that into your body because of this) have an epigenetic effect on the SERT transporter.

The SERT transporter helps to re-uptake serotonin after it has been released, This is the target for the popular antidepressants called SSRIs – that stands for Selective Serotonin Reuptake Inhibitor (it’s essentially a SERT inhibitor).

Taking an SSRI or inhibiting SERT doesn’t change the amount of serotonin you have, but it changes how long it stays out there as a signal. The longer it’s out there, the more effect it has and the happier you feel.

Folate in all of it’s forms actually boosts SERT function so even though folate helps your body manufacture more serotonin through the BH4 pathway, it boosts re-uptake more, so the net effect feels like lower serotonin.

The great news is that often the people who don’t respond well to folate, do typically respond really well to supplements and often drugs that boost serotonin. These include:

Where Do I Start?

Sometimes, even without low serotonin some MTHFR folks just don’t do well with high-folate foods or supplements like 5-LMTHF. In this scenario, it is still a good idea to try the steps above and if low serotonin (which usually feels like depression) isn’t the issue then you might be able to try a tiny dose of folinic acid, which for some reason is better tolerated in this situation. It still might not be right, but it is worth a try to see if we can get that cycle moving just a little bit. Otherwise, follow the Start Here for MTHFR guide.