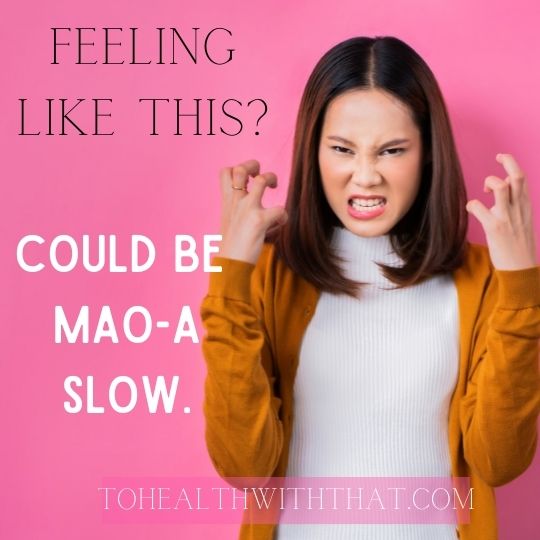 MAO-A Slow and Your Short Fuse

MAO-A is an enzyme of singular importance, and the gene SNPs that alter its activity have additive effects, just like the COMT gene SNP that we spoke about some months ago, to produce either fast or slow action.

MAO-A stands for Monoamine Oxidase A, and it is the primary breakdown pathway for your monoamine neurotransmitters, which means serotonin, dopamine, and norepinephrine. I’m hoping just that tiny introduction is raising red flags in your thoughts because those three little things, serotonin, dopamine, and norepinephrine, determine so much of how you behave, feel, and present in the world.

An interesting note about the MAOA gene – most of the genes SNPs we’ve talked about are linked to regular chromosome pairs, meaning there are two functioning copies of every gene. This particular gene is X-linked, meaning that it sits on the X chromosome or chromosomes that are responsible for physiological gender determination. This means men have only one copy of the MAOA gene and women have two, but one is silent. In women’s genes there is no way, from a genetic report, to tell which copy of the MAO-A gene is active so symptoms are the best place to look.

High neurotransmitters sounds amazing, right? Extra serotonin – who doesn’t want that? Well, as with everything else in health, the key factor here is balance. Excess is not balance.

Signs of a Slow MAO-A and Signs of Excessive Neurotransmitters

The hallmark here is rapid escalation that is difficult to normalize.

What You Can Do To Balance A Slow MAO-A

One of the key factors with a slow MAO-A is helping your psychology and physiology to calm down, and there are a number of things that can help you to do that.

Next week, we’ll talk about the corollary MAO-A fast picture. Thank you so much for listening today and if you are looking for an amazing community of folks who are also working with their genes to get better, then Genetic Rockstars is for you. Enjoy a free two-week trial at community.tohealthwiththat.com